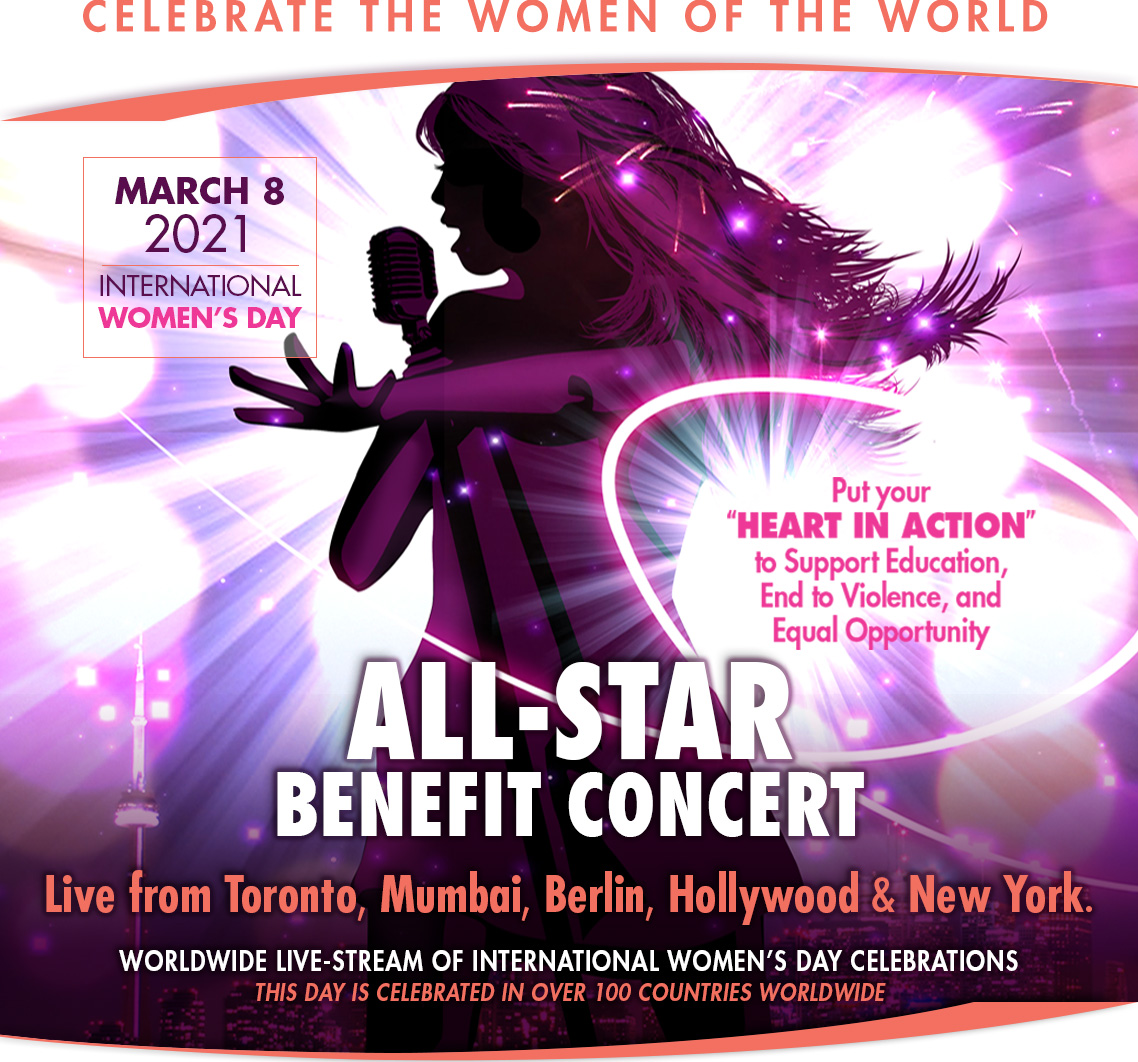 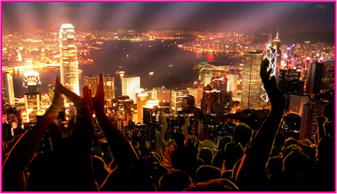 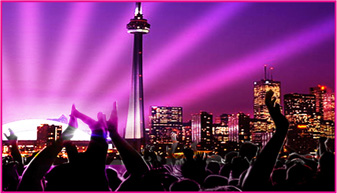 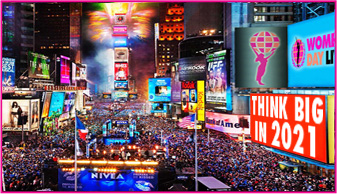 Join millions of Celebrants to Celebrate the Power of Diversity, Inclusion and Equal Opportunity 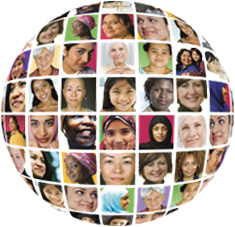 Join an ambitious Global Leadershp Effort to Champion the rights of women and girls. Let us be the generation that could change the future for women and girls – and did so. 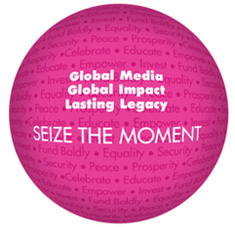 Women's Day Live is a spectacular All-Star Multi-Venue Global Benefit Concert that will celebrate the achievements of the women of the world on this epic International Women`s Day celebration, March 8th, 2021. Hollywood and Bollywood’s legendary talent will join together to dazzle and galvanize the world with an up-beat heart-centric call to care and take action to make this  Global Heart in Action Humanitarian Campaign the most successful Charitable fund-raiser in modern history. We will open the heart of humanity to lend a helping hand to women and children during this severe global humanitarian crisis.

WOMEN ROCK THE WORLD. Join us for this exciting first of its kind social interactive live global media event that will use the power of music to bring the world together for a day of unity. Broadcast live from Mumbai, Toronto, Berlin and Hollywood/New York, we will showcase International Women’s Day celebrations around the world.

WE STAND AT A DEFINING MOMENT AS A HUMAN FAMILY. Live Aid was one of the most important humanitarian events of the 20th century. It established the power of artists to unite people around the world in a common cause. The broadcast was seen by 1 billion viewers in 110 countries. 40 nations held telethons during the broadcast. Actualizing the equal status and the education and empowerment of women and girls is the most profound imperative of the 21st century. We simply must act to meet the existential threat that humanity is facing due to the dangerous rise of wealth inequality worldwide.

OUR MISSION is to invigorate a UNITED global effort to galvanize unprecedented levels of investment in educating and empowering women and girls. This innovative new approach to globe spanning philanthropy – a UNITED global effort between governments, philanthropy, corporations and the public can create a sustainable model of International Development and Aid which can address society’s problems systemically and collaboratively.

The Time for Change is now. We have this once in a lifetime opportunity to change the name of the game for women. Transformational change is possible and it is coming from Canada! We will build the Women’s Day Live Festival and Global Heart in Action Humanitarian campaign to become one of the most popular multi-venue International Music Festivals in the world, one that keeps giving back to the future every year every International Women’s Day.

World Leaders Pledge to Accelerate Gender Equality. Let us spark a global movement and call on world leaders to support Canada’s ambitious global leadership effort to accelerate women’s global economic empowerment by keeping their pledge to also put women and girls at the heart of their International development agenda.

Canada’s historic investment in Grassroots Women’s Funds worldwide is a GAME-CHANGER! G7 Summit Leaders pledged to follow Prime Minister Trudeau’s lead at the G7 Summit Canada hosted in 2018. This means billions in the hands of women in the grassroot this year and in years to come. Before only 2% of International Aid went to women. Our goal is 50%. The G7 summit is in the U.S. this year. These pledges are at stake.

A Live 12 hour Charity Telethon Takes Us Around the World. Giving us a multi-screen experience of International Women’s Day celebrations being posted live from around the world. This day is celebrated annually in over 100 countries, with thousands of self-created events that take place annually worldwide. It is a national holiday in 35 countries including China, Russia, Rwanda and the city of Berlin! This day will be a social networking bonanza. A social take over!

We kick off this live global celebration of a historic milestone for women with a sensational opening ceremony and live performance on Parliament Hill in Ottawa, with Prime Minister Trudeau and Sophie Trudeau ushering in a new era for the world’s women and girls. Then to the UN Assembly for UN Women’s ceremony celebrating the rich diversity of the world’s women and girls.

We will feature highlights of world leaders pledging equality for women by 2030, at the UN Beijing + 25 Anniversary Ceremony at the U.N. Assembly in the fall of 2020, and highlights of the Centennial Celebration of Women Winning the Right to Vote in the U.S.A, which will be celebrate Equality Day with the Centennial Concert August 29th, 2020.

Hosts at a Hollywood studio lot will keep us rocking ‘n rolling with performances, and live posts of select live International Women’s Day (IWD) celebrations happening worldwide. We close this live global mega-shed day with a spectacular Benefit Concert in Toronto, featuring the world’s legendary stars, and a spectacular entertainment extravaganza featuring women and girls from around the world in their full glory, power and promise. This will be a tribute to Canada’s Prime Minister Justin Trudeau, and his bold and ambitious global leadership effort to champion the world’s women and girls. 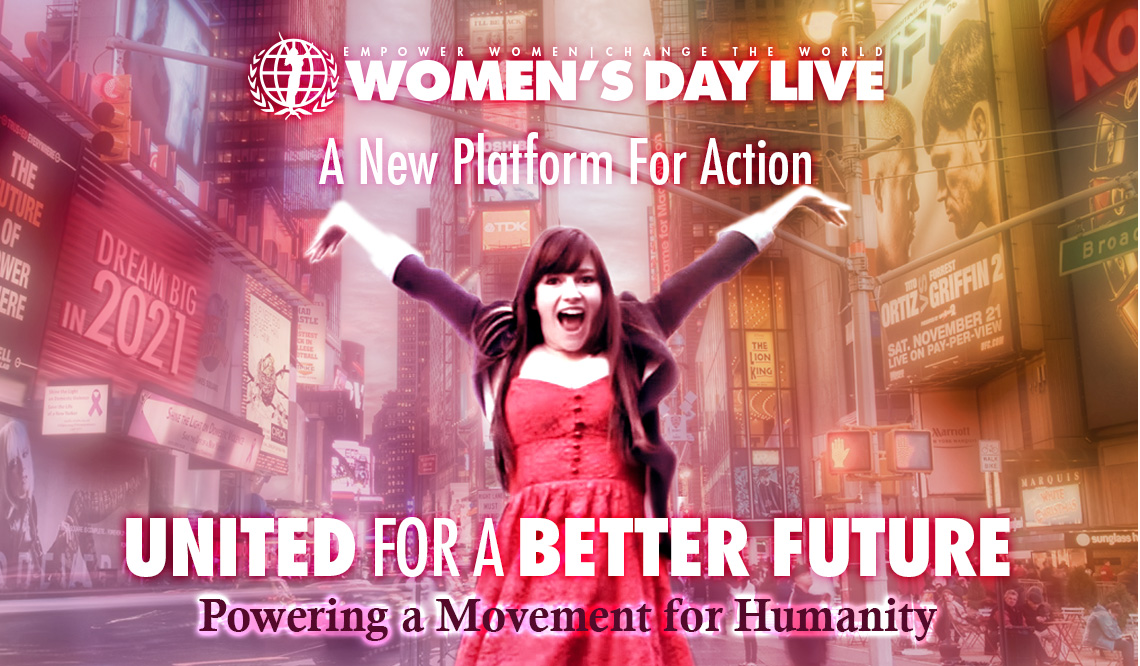 SOCIAL JUSTICE GLOBE SPANNING PHILANTHROPY. The thing WE ALL want to do the most is to make an impact. We’ve fought hard to achieve an equal future. This is the defining moment for us to do it. My deep aspiration that has led me to dedicate my life to this mission is to see every woman and girl have the right to an education and to equal opportunity. To have the freedom to live her dreams and fulfill her destiny. It is my great hope that we will come together to do this. If not now. When?

If we do not earnestly commit to a united global effort to invest in educating and empowering women and girls now, moving forward from this historic Centennial year for women, and the Anniversary of the UN Beijing +25 Platform for Action -  We will never meet the deadlines for achieving the Sustainable Development Goals and equality by 2030. To make it happen we have to start now.

Marrying the top down power of concerts, brands, celebrities, media and global institutions with the bottom up power of distributed global networks and small-scale local leaders is what will make this potentially a game-changing day in history. 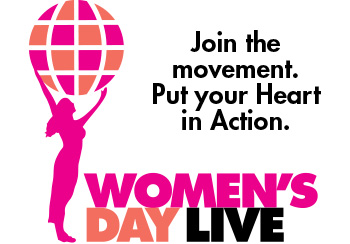